Discover D'Artagnan: Charles de Batz Castelmore d'Artagnan, born in Lupiac around 1613 and killed in Maastricht (Netherlands) on 25 June 1673 while leading the prestigious first Company of Musketeers of King Louis XIV.

This very real character, remarkable in more ways than one, inspired the mythical D'Artagnan of Alexandre Dumas' Three Musketeers.

Great loyal servant of Mazarin and then of Louis XIV, who placed their full trust in him. Personally in charge of the arrest of the superintendent Fouquet and then of his escort. A destiny out of the ordinary.

Come discover and rub shoulders with d'Artagnan in his native village of Lupiac. 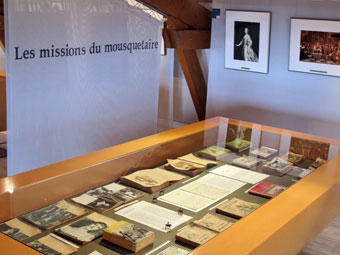 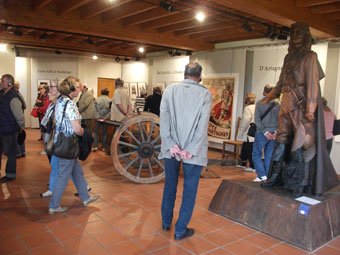 The d'Artagnan Museum invites you to dive into the 17th century in the company of the Musketeers and d'Artagnan. Beware!

Come to discover the real life of d'Artagnan, he who left his village of Lupiac, around 1630 to become Captain of Musketeers, close friend of Louis XIV and later... A legend!

An hour's visit with an audio guide takes you through a audio and visual experience. Numerous documents and reproductions of works evoke the real history of d'Artagnan as well as his historic context.

A little plus for the family:

a game-leaflet for the children. Pencil in hand and eyes wide open, leave for the adventure of the Musketeers!

Group tours available year-round by prior arrangement. Contact the museum well in advance. 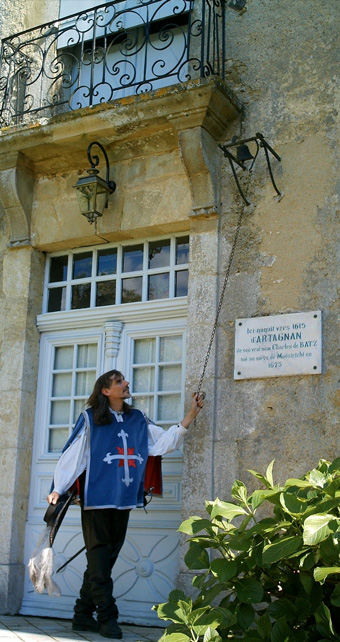 D'Artagnan, legendary hero of the most famous novel of the swashbuckling The Three Musketeers, really existed. To create his character, Alexandre Dumas was inspired by the work of a novelist of the time of Louis XIV, Courtils de Sandras, who, in 1700 published the Memoires de Monsieur d'Artagnan. In these memoirs the author presents in a very romantic manner the life of an authentic youngster of Gascony, lieutenant-captain of the first company of musketeers of King Louis XIV; Charles de Batz Castelmore d'Artagnan.

Born of a Gascon father....

The father of our hero was allied to the branch of Montesquiou, one of the most important lineages of Gascony. This noble family descends from the ancient counts of Fezensac.

It was in the chateau of d'Artagnan, near Vic en Bigorre that, on 6 February 1608, the marriage took place of these nobles. Jean de Montesquiou d'Artagnan, former officer in the French Guard, gave on this day the hand of his daughter, Francoise de Montesquiou to Sir Bertrand de Batz-Castelmore, lord of La Plagne. Of this union were born seven children, three daughters, Claude, Henrye and Jeanne. Then four sons, Paul, Arnaud, Jean and......Charles de Batz de Castelmore, lord of La Plagne, count d'Artagnan.

Yes it is indeed our young Gascon of whom all the world knows the exploits!

Aged only about 17 our young Gascon went to Paris.

After his entry into the musketeers in 1644, Cardinal Mazarin entrusted d'Artagnan, during Le Fronde, with a number of missions requiring total discretion.

Links of reciprocal confidence and estime, already begun during Le Fronde were confirmed between King Louis XIV and d'Artagnan. His open, brave and faithful character pleased the young king who had total confidence in him.

d'Artagnan's place was henceforth with the King Louis XIV.


To find out more about the true history of d'Artagnan we recommend that you visit "The World of d'Artagnan": 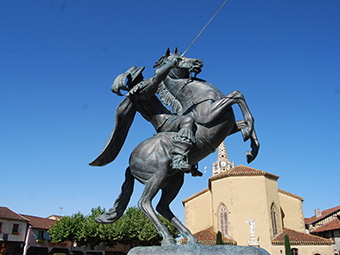 In the square at Lupiac, one of the oldest "castelnaux" of the Gers, there stands the first equestrian statue of d'Artagnan, inaugurated on 09 August 2015.

Thanks to the talent of sculptress Daphné du Barry and to the generosity of a Gascon patron, this monumental bronze - 3.5 metres high and weighing more than a tonne - represents d'Artagnan, on his rearing steed and brandishing his sword. The impression of movement and the attention to detail are such that we expect to hear the neighing of the horse.

This work is the starting point (or end point) of the Route Européene d'Artagnan. 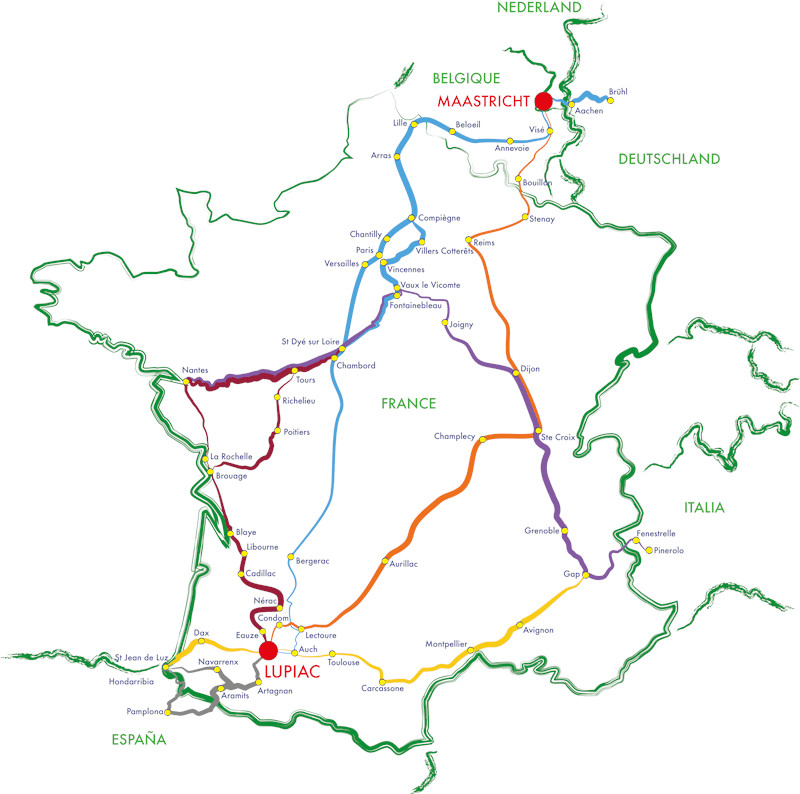 Starting from Lupiac in the Gers where Charles de Batz Castelmore, better known as "d'Artagnan", was born around 1613, the European Route d’Artagnan unfolds along more than 6,000 km of trails through 15 regions in six European countries: Germany, Belgium, Spain, France, Italy and the Netherlands. Including 300 km in the Gers department alone.

The two main branches of the Route link Lupiac to Maastricht, in the Netherlands, where d'Artagnan died in battle on 25 June 1673.

In the footsteps of d’Artagnan

The Route d'Artagnan extends a web around historical landmarks, witnesses to the exemplary journey of the real d'Artagnan, and literary landmarks, scenes of the novels of Alexandre Dumas that immortalized d'Artagnan and his fellow musketeers.

The Route takes travellers on a journey of discovery of not only 17th century European history, but also of the landscapes, identities, traditions and heritage associated with the life of this iconic figure.

A "Cultural route of the Council of Europe"

The Route d’Artagnan was certified a Cultural route of the Council of Europe in 2021. This made it part of a programme launched in 1987 to demonstrate, by means of a journey through space and time, how the heritage of the different countries and cultures of Europe contributes to a shared and living cultural heritage..

For all, accessible and popular

True to the spirit of the famous motto of the Three musqueteers, All for one, one for all, the Route d'Artagnan is a route for all: horse riders, cyclists (mountain bikes) and walkers. Some portions are also accessible to horse drawn vehicles.

The Route is accessible to the greatest number of people, with a minimum of resources or technical or physical capacities required. Accessible and popular, like the unforgettable novels of Alexandre Dumas. 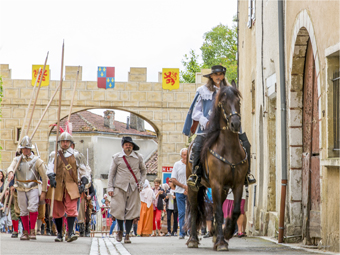 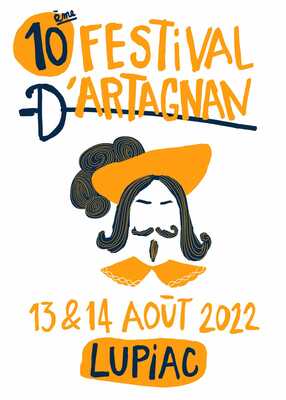 This is a reconstruction of a Fair at the time of d'Artagnan. The day involves about 500 costumed volunteers, more than thirty musketeers on horseback and on foot, a camp of soldiers of the Thirty Years' War, dozens of craftsmen. You can take part in a Gascon Mass, listen to Baroque songs and music, feed in taverns and inns serving drink and food of the 17th century.

You can learn to fire a musket and use a pike, be present at duels and disturbances, watch dances by the washerwomen and the gypsies, play games from the time of our musketeer and attend a lecture on the time of d'Artagnan.

Come and spend a day in company of all these people in costume who dance, sing, and engage in duels, and enjoy the spectacle and the fun of the fair.

Saturday 13 August - before the festival

For more information, please contact the organisers of the festival:

For videos of the festival: